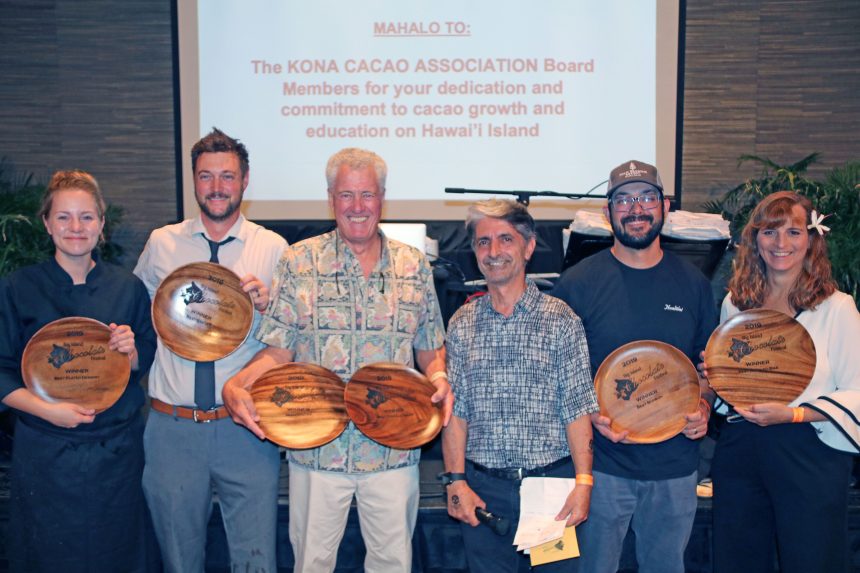 A sold-out crowd of 700 guests nibbled, munched, and sipped their way through dozens of food and beverage booths at the eighth annual Big Island Chocolate Festival gala at The Westin Hapuna Beach Resort. This splashy fundraiser not only benefited seven Hawaiian non-profits, but also named professional and amateur chef winners for a range of delicious and unique.

Creations by chefs, chocolatiers and culinary students were critiqued on taste, texture, appearance and creativity by a team of celebrity judges at competitions during the annual two-day festival.

Those who best dazzled the crowd with their creations earned the People’s Choice Awards: Chef Dayne Tanabe of Hilton Waikoloa Village for Best Savory and Pastry Chef Daniel Sampson of the Fairmont Orchid, Hawaii for Best Sweet.

“It’s great the field of competition is growing in the bean division, which basically critiques the quality of beans after fermentation and drying,” noted Farsheed Bonakdar, president of the Kona Cacao Association, the organization that produces the festival. “Proper fermentation optimizes the flavor profile of chocolate.”

The event theme, “Black and White,” was depicted at culinary stations and Original Hawaiian Chocolate Factory of Kona was tapped Best Decorated Booth.

In addition to last night’s gala, the festival offered a full lineup of chocolate decadence from planting to plating: a Kona cacao farm tour, cacao growing and processing seminars, how-to culinary demonstrations by chocolate industry experts and a unique chocolate and tequila pairing.

Bookmark this website and return in the fall for details on the 2020 event. Aloha!