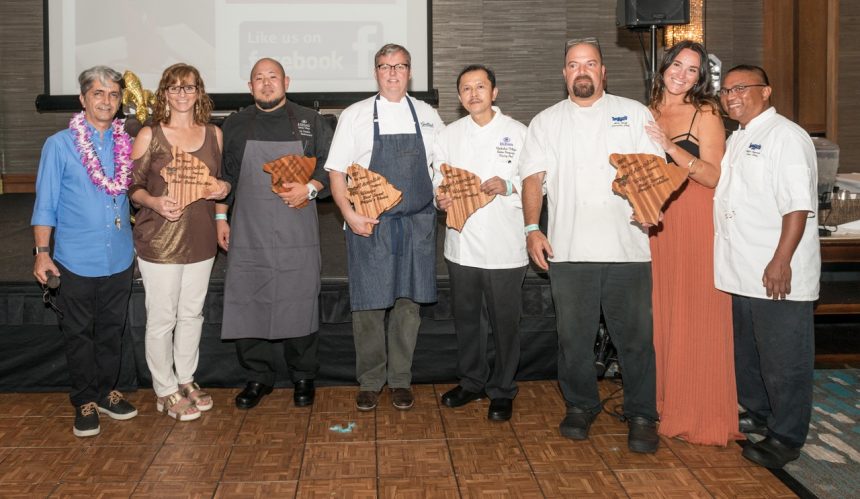 Culinary entries from Maui and the Big Isle were tapped winners at last night’s Big Island Chocolate Festival gala. A sold-out crowd of 600 attendees sprawled inside and out of the Hapuna Beach Prince Hotel for the sixth annual fundraiser to benefit four island non-profits.

The event theme “Worth Its Weight in Gold-The History of Chocolate” was depicted at culinary stations and the Four Seasons Resort Hualalai was tapped Best Decorated Booth.

Creations by chefs, chocolatiers, college and high school culinary students were critiqued on taste, texture, appearance and creativity by a team of celebrity judges at competitions during the two-day festival.

For Friday’s college competition, UH-Maui College took first and second while UH-Palamanui came in third. Due to a mix up in the judging process, the incorrect winners were named during the gala and the judges later made the correction.

In addition to last night’s gala, the festival offered a full lineup of chocolate decadence from planting to plating: a Kona cacao farm tour, plus growing and processing seminars and how-to culinary demonstrations by chocolate industry experts.

The Big Island Chocolate Festival is presented by the Kona Cacao Association, Inc. The mission and goal of KCA is to promote the cacao industry on the Big Island of Hawai‘i by presenting BICF as an educational and outreach opportunity for local cacao farmers, the hospitality industry and cacao enthusiasts. Mahalo to 2017 event sponsors: